Desktop 3D Printing- A Revolution in the Design Studio

Designers have been using 3D CAD as a main stream design tool for a good few decades now, but up until very recently, the ability to generate prototypes from those models has been relatively expensive. Design Studios have traditionally outsourced 3D printing to specialist rapid prototyping companies with industrial machines, with a corresponding time delay.
Of the many available rapid prototyping processes, our first in-house 3D printer, bought around ten years ago, used inkjet printing technology to bind together layers of powder. It was relatively large, dusty and noisy and therefore needed it’s own room. The powder had to be vacuumed away to reveal the printed parts which were very delicate, post processing required infiltration with cyanoacrylate or epoxy resin. It was a time consuming and messy process, which came with a hefty £20K price tag for the machine alone.
SLA printing technology has also been around for a long time but was heavily patented, restricting entry to the 3D printer market to heavyweight players with heavyweight price tags. The expiry of these patents, however, brought about a small revolution. Formlabs launched its Form 1 desktop printer with a Kickstarter campaign, incredibly as recently as 2011, and has moved SLA technology into the mainstream, resulting in an affordable, compact 3D printer with the ability to build detailed and high resolution models from light curable resins. Countless others have followed as the technology advances at pace.
Post processing the parts is also much more straightforward, they are rinsed in alcohol and cured by UV light, either naturally or with a UV lamp. It’s a relatively fast process, small components can be printed within a few hours. Machines are compact and quiet. Much thought has also been given to their industrial design and they sit well in the most design conscious studio. A selection of materials including tough, flexible and castable for investment casting and various colours further widen the possibilities.
For the smaller design studio, the ability to take CAD models off the screen and into your hands within a few hours at the concept stage has brought enormous benefits. It is the tool we have all been waiting for. Of course 3D CAD is invaluable in terms of detailed design, analysis and tooling manufacture but during the design phase there is no substitute for actually holding something in your hand and manually testing it. To see how a user interacts with a product you really need to put it in the hands of a real person. We were recently asked to develop a tamper evident feature for an existing product. We needed to simulate the mis-use of various tools by the user in attempting to ‘break-in’ to the product. With the ability to produce 3D prints quickly and cost-effectively, we could model, print and test various ideas and by making incremental changes, develop and refine the effectiveness of the design. 3D prints can be generated early in a design development with many iterations, allowing designers and their clients to easily evaluate and test multiple ideas at the concept stage.
Much development work can now be done before committing to more specialist and perhaps material specific rapid prototyping techniques, and before committing to expensive tooling. Quick prototypes can now be easily generated in the early stages of a project. Of course those little Eiffel tower models look great but the desktop 3D printer has so much more to offer than that. 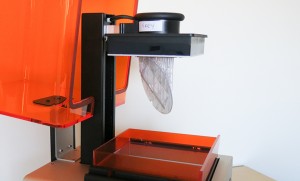